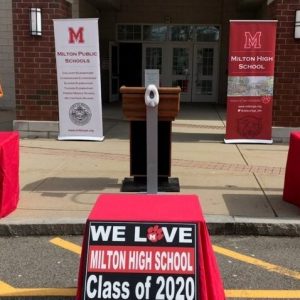 Despite the coronavirus pandemic, some high school seniors across Massachusetts will be able to line up to receive their diplomas, ceremoniously turn their tassels, and toss their caps — at a drive-thru parade.

Over the past few weeks, several Massachusetts high schools have announced they will be holding graduation parades as a socially-distanced alternative to traditional ceremonies.

The idea first came to James Jette, principal of Milton High School, which is scheduled to graduate its senior class on June 7.

“I have a number of students at the senior class who have chronic health issues, whether it’s asthma, diabetes, a heart condition, some battle cancer — and that’s not even counting the immediate parent or guardians who would then have to make a decision not to come, if we [tried] to put everybody together in one one area,” said Jette. “We’re not forcing people to choose between their health and this.”

Jette shared Milton High School’s graduation plan with a group of high school principals across the Bay State — and the idea took off. Ashland, Needham, Norwood, Dover-Sherborn, Walpole, Stoughton, and Franklin high schools among several others, all adapted the idea for their own ceremonies.