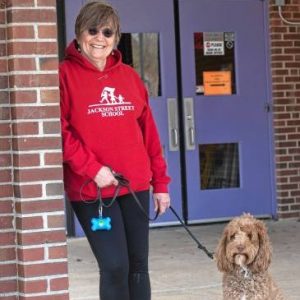 NORTHAMPTON — Gwen Agna initially hesitated when she was offered the role of interim principal at Bridge Street School in 1993. She stayed up all night writing a letter to then-school superintendent Bruce Willard “about all the things I couldn’t do,” she recalled. “I said, ‘I don’t yell at children. I don’t fix boilers,’” thinking that was how she would spend her days as a principal.

But Willard convinced her to take the offer, and “I found it was the most wonderful job,” Agna said recently. “I was really taken with it.” She was sad to later step aside and give the position to the permanent replacement, Johanna McKenna, she added.

In 1996, Agna became the principal at Jackson Street School, but she didn’t give much thought to how long she would stay in the position. Twenty-four years later, she’s retiring as the school’s principal at the end of the academic year and ending her 32-year career in the district.

“This has been my best job that I’ve ever had,” Agna said and laughed. “There’s so much that happens in the day of a principal.”