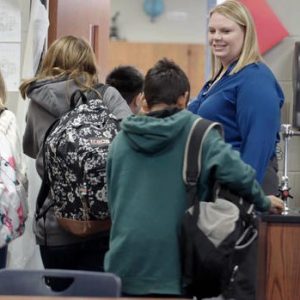 Melissa Lau, a middle-school science teacher in Piedmont, Oklahoma, with over 19 years of experience, stood by the doorway of her classroom as the last few of her first-period sixth grade students filed in and took their seats.

“Hey guys, you need your papers from yesterday, and a pencil,” said Lau, launching into the day’s lesson. “So, how can I identify misleading information? I know you guys know conspiracy theories. You guys watch enough YouTube to know what that stuff is.” Lau told CBSN Originals that the rise of pseudoscience on the video-sharing platform has made her job teaching science more difficult — and more important.

Since its launch in 2005, YouTube has amassed an audience of over 2 billion monthly active users. Part of the secret of its success is the personalization algorithm that suggests videos based on viewing habits, a process that can create a feedback loop of misinformation. With just a click or two, students can be drawn into debunked and anti-scientific diatribes about climate change, evolution, and even whether the Earth is flat.

Based on recent surveys, children are increasingly likely to rely on YouTube for information. A 2019 report from Common Sense Media found that 56% of kids ages 8 to 12, and 69% of teens ages 13 to 18, watch videos online every day. According to a Pew Research survey of YouTube users, half said they use the platform for education purposes. But many of the videos they may encounter on science topics are not based on established scientific data at all, and instead promote pseudoscience, false claims  and conspiracy theories.