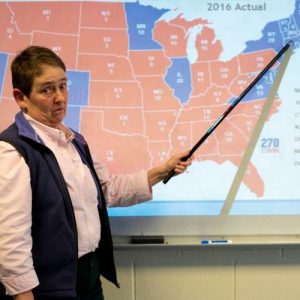 SOUTH DEERFIELD — What’s a primary? What’s a superdelegate? Why is Iowa such a big deal? What are we voting for, again?

In fact, she has been getting a lot of practice lately. Moore also teaches classes on U.S. history, law and economics. But this semester, due to an unusually high enrollment, all of her time is spent teaching government classes.

“It’s a good time to be teaching this class,” she said. “And, I have to say, the students are really interested.”

It starts with federalism, the combination of multiple regional governments into a single political system. The U.S. Constitution establishes a federalist government in which — basically — states are free to do what they want according to their own constitutions, as long as they do not violate the U.S. Constitution.

There is often some inherent legal messiness to political processes that involve the federal government and multiple state governments. Whenever this messiness rears its head in Moore’s lessons, she points at you, looks at you out of the corner of her eye, and says, “Because of federalism.” This makes it a little easier to remember.

There is perhaps no political process that is messier in this regard than the presidential primary election, in which political parties operate across 50 states to nominate their candidates for a highly prestigious, highly coveted, highly controversial position in the federal government.

It’s messy because the U.S. Constitution does not give specific guidelines on how to run an election — leaving states and political parties relatively free to figure it out on their own, Moore said.