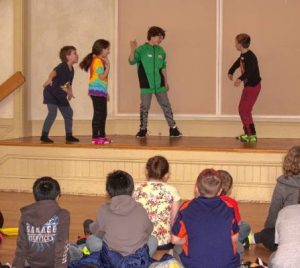 The 15 students in the school’s Improv Club gave a 30-minute demonstration, sponsored by the Warwick Arts Council, under the direction of Jonathan Mirin, co-founder of Piti Theatre Co. in Shelburne Falls. It was the third year the club has appeared following the Senior Meal. The club is a combination of new third-graders and older students who have participated in Improv Club since its beginnings in 2017.