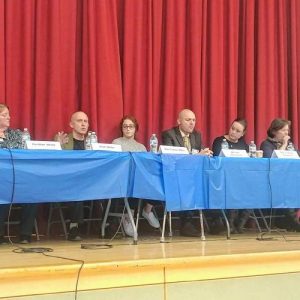 HATFIELD — In 1992, Anne Thalheimer was a teenager in her second year at Bard College at Simon’s Rock when her life changed.

“I was writing a paper for his class … and then the phone rang, a voice telling us to turn out the lights, lock the door and get down on the floor,” Thalheimer recalled in front of an audience at Hatfield Elementary School on Tuesday. A classmate had brought a gun to campus and shot one of her friends, Galen Gibson, and her teacher, Ñacuñán Sáez.

Exactly 20 years later, friends messaged her saying not to turn on the news. The Sandy Hook Elementary School shooting had just taken place. Now, she said, everyone from “preschoolers to postdocs” knows what to do in the event of a mass shooting.

“We must work to change this, and this is a responsibility that we all share,” she said.

Thalheimer was the keynote speaker at a panel titled “Beyond Gun Laws” put on by Northwestern District Attorney David Sullivan and the mental health support organization Hatfield HEADS Up. Panelists included elected officials, the town’s police chief, a middle school student, a researcher from Smith College and a suicide prevention advocate.

The panel was meant to address the ramifications of school violence across the country, how it impacts children, how adults can help young people cope with fear, and the status of gun laws making their way through the state Legislature.

Thalheimer noted that her experience is unusual. Mass shootings are statistical anomalies in the larger picture of gun violence, she said. She pointed to the fact that suicides make up a large portion of gun deaths, and that many gun deaths result from guns not being properly secured.