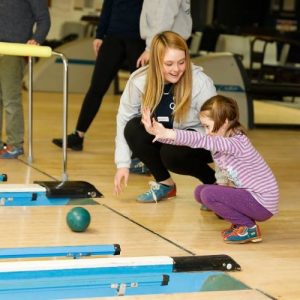 ERVING — The sound of children’s laughter blended with the crashing and rattling of bowling pins at the French King Bowling alley Thursday during another week of the Pioneer Valley Regional School District’s Special Olympics bowling season.

“It gives kids a chance to be kids, and play with their friends in an inclusive way,” Scott said.

The Special Olympics bowling program has grown since its founding in January 2017, and now has roughly 15 high school and middle school students volunteering as “unified buddies” with the 10 Special Olympics athletes. For eight weeks, in January and February, students head to the French King Bowling alley each Thursday.

Scott said the program runs smoothly and is looked forward to every week by the students involved. Many of the bowlers have participated since its founding, including Pioneer senior Ella Potee who said the weekly event is a fun way to connect with the student athletes. Each week the buddy pairs rotate to socialize with, and compete against, different friends.

Madi Sulda, a junior at Pioneer, said it’s nice to help the younger kids, noting that she also volunteered with the Turkey Trot in November. Madi was partnered with Dylan Snow, 11, a Bernardston Elementary fifth-grader and Special Olympics athlete.

After rolling a spare to win the game in his lane, Dylan, who uses a wheelchair, said he has been playing with the Pioneer Special Olympics bowling group since its inception. He and Bernardston Elementary classmate Kirsten Ladner, 11, who also uses a wheelchair, take adaptive physical education classes with Scott.

“We get to play cool games in class,” Dylan said. “We play … well, it’s like basketball but with hula hoops hanging down.”