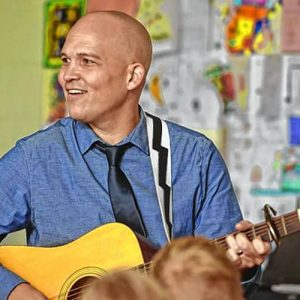 BELCHERTOWN — Swift River Elementary School teacher Geoffrey Gould is in the running to take home Grammy gold on Sunday after being chosen as a finalist for the Grammy Music Educator Award.

Gould, who was nominated for the award by a colleague, found out last year that he had been chosen from a pool of over 3,300 candidates as one of 189 quarterfinalists in the running for the honor. Now, he remains part of a field that the Recording Academy and Grammy Museum have narrowed to just 10 music educators from around the country, one of whom will take home the Grammy award during Sunday’s ceremony.

Among his recent accomplishments, Gould has taken elementary school music education to new heights with the installation of a college-level piano lab at Swift River, in addition to facilitating a gift of six free pianos from Westfield State University to Belchertown High School and Chestnut Hill Community School — two efforts that Gould believes stood out in the award consideration.