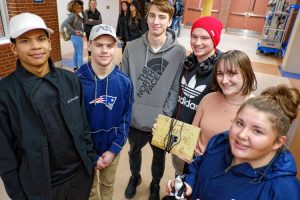 TURNERS FALLS — The newest advisors to the Montague Selectboard may be a group of high school students.

As the culminating project for the semester, the Turners Falls High School physics class studied two difficult turns on roads in Turners Falls to try to determine whether the speed limits should be changed or if special restrictions should be added.

In most semesters, science and technology teacher Brian Lamore ends his physics class with some sort of real-world modeling problem; but it’s usually something more traditional, he said, like launching a toy rocket. But when a tractor trailer rolled over last April on the Third Street curve heading downhill into Turners Falls, Lamore revised his class’ assignment, allowing them to analyze the turn.

“The accident was really the impetus,” Lamore said. “Unfortunately, someone else’s misfortune translated into an opportunity for students to learn.”

The second turn, also on Third Street but at the intersection with Park Street, was chosen because it is difficult for similar reasons to the first one. Unlike most turns, both of these ones bank away from the direction of the turn, which adds extra burden to the tires, Lamore said.

Lamore and the six juniors and seniors in the class started taking measurements in November. The three relevant variables, they explained, were the slope of the road, the radius of the turn and the friction of a vehicle’s grip on the asphalt. The goal was to calculate the speed at which a vehicle would slide out of its turn.

The physical measurements of each turn radius were based on images from Google Maps, Lamore said; but the others were based on field work. In one part, the class rode in a van through the turns while monitoring an accelerometer, a device that measures acceleration across three axes.