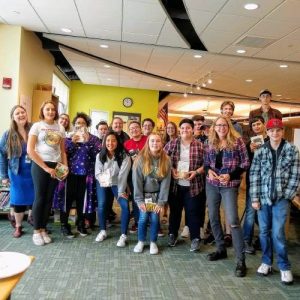 Before King (Amy Sarig King) asked those questions, though, she explained to students how she became a writer because of a can of succotash and several English teachers who didn’t give up on her.

“When I was young, I had to eat all of my vegetables, and I hated succotash,” she started. “Some nights I’d be at the dinner table until 10.”

When she was in ninth grade, she was given an assignment to write, first-person, about a can of succotash. She wrote about the last can of anything on the shelf of the local grocery store during a blizzard.

King writes about trauma in ways pre-teens and teens can relate, covering topics like divorce, depression, racism, human flaws and much more.

King said she was bullied and her trauma just got bigger — until she decided to explore and empty her “suitcase,” as she pointed to her head.

King said her emotions and experiences are just some of the vehicles she uses to write her books — 11 of them and a new one, “The Year We Fell From Space,” which is about depression, is coming out Tuesday.