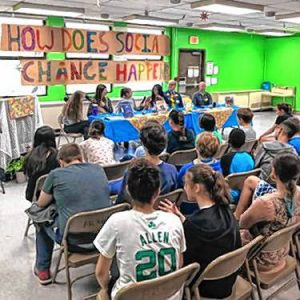 AMHERST — Amherst Public Schools have received a $10,000 grant from the Southern Poverty Law Center to bring its civic literacy and organizing education to more classrooms in the coming school year.

The nonprofit awarded the school the money through its Teaching Tolerance program which gives out educator grants for up to $10,000 to “support projects that promote affirming school climates and educate youth to thrive in a diverse democracy,” according to the organization.

At Fort River Elementary School last school year, sixth grade teacher Tim Austin started teaching a civic literacy and organizing unit that built on the civics curriculum with $5,000 in grant funding from the SPLC’s Teaching Tolerance initiative. In the upcoming school year, the unit will be taught in all sixth grade classrooms in Amherst and Pelham elementary schools and eighth grade in the Amherst-Pelham Regional Middle School.

“We always wanted to teach the students how to take the next step and organize a campaign to make the changes they were looking for,” Austin said. “Having the resources through the grant made it possible for us to have a much bigger impact.”