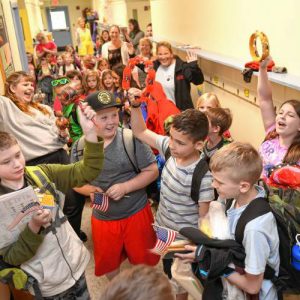 LEYDEN — It was the last day of school Friday, and students’ summers began.

But even with the school’s-out excitement, there was a feeling of sadness among teachers, parents and children still at Pearl Rhodes a few minutes after the school day ended because this was the last day for Pearl Rhodes Elementary School.

The school opened in 1951 as Leyden Center School and was renamed in 1992 in honor of longtime principal Pearl Estelle Rhodes, who had just retired. Its closure follows a lengthy debate over the Pioneer Valley Regional School District’s finances and future.

“She’s been going here for five years,” Adamski said of her daughter, who will be attending school in Gill next year.

Kaylee and Jakayla both called the last day “sad,” with Kaylee adding that it rained, too. Inside, lingering staff all repeated the same word: “sad.”

As the smallest school in the district, Pearl Rhodes’ potential closure was a topic of discussion for several years. School officials said in March that the closure will still not solve the district’s financial unsustainability,