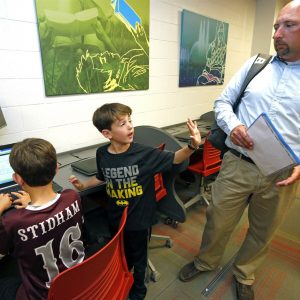 HARTFORD, Conn. — With no computer or internet at home, Raegan Byrd’s homework assignments present a nightly challenge: How much can she get done using just her smartphone?

On the tiny screen, she switches between web pages for research projects, losing track of tabs whenever friends send messages. She uses her thumbs to tap out school papers, but when glitches keep her from submitting assignments electronically, she writes them out by hand.

“At least I have something, instead of nothing, to explain the situation,” said Raegan, a high school senior in Hartford.

She is among nearly 3 million students around the country who face struggles keeping up with their studies because they must make do without home internet. In classrooms, access to laptops and the internet is nearly universal. But at home, the cost of internet service and gaps in its availability create obstacles in urban areas and rural communities alike.

In what has become known as the homework gap, an estimated 17% of U.S. students do not have access to computers at home and 18% do not have home access to broadband internet, according to an Associated Press analysis of census data.

Until a couple of years ago, Raegan’s school gave every student a laptop equipped with an internet hot spot. But that grant program lapsed. In the area surrounding the school in the city’s north end, less than half of households have home access.

School districts, local governments and others have tried to help. Districts installed wireless internet on buses and loaned out hot spots. Many communities compiled lists of wi-fi-enabled restaurants and other businesses where children are welcome to linger and do schoolwork. Others repurposed unused television frequencies to provide connectivity, a strategy that the Hartford Public Library plans to try next year in the north end.

Some students study in the parking lots of schools, libraries or restaurants — wherever they can find a signal.

The consequences can be dire for children in these situations, because students with home internet consistently score higher in reading, math and science. And the homework gap in many ways mirrors broader educational barriers for poor and minority students.

Students without internet at home are more likely to be students of color, from low-income families or in households with lower parental education levels. Janice Flemming-Butler, who has researched barriers to internet access in Hartford’s largely black north end, said the disadvantage for minority students is an injustice on the same level as “when black people didn’t have books.

Raegan, who is black, is grateful for her iPhone, and the data plan paid for by her grandfather. The honors student at Hartford’s Journalism and Media Academy tries to make as much progress as possible while at school.

Classmate Madison Elbert has access to her mother’s computer at home, but she was without home internet this spring, which added to deadline stress for a research project.

“I really have to do everything on my phone because I have my data and that’s it,” she said.