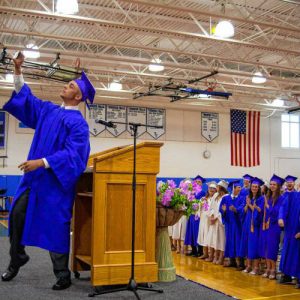 TURNERS FALLS — Joyce Phillips and Carol Gloski of the Gill-Montague Education Fund gave out about 50 cut pink roses to the same number of graduates who walked across the stage at Turners Falls High School’s 2019 commencement ceremony Friday.

The evening, like the graduates, according to Senior Class President John Putala, ranged from humorous to profound — for example, a joyfully flung mortarboard caught on the gymnasium’s folded basketball hoop; another student’s shoe became stuck as well when he tried to dislodge the cap. Putala himself began his speech with a reference to rapper Kanye West and concluded with a quote from Snoop Dogg.

Wherever they go, Putala encouraged his classmates to dedicate themselves to the task at hand.

“If it’s flipping hamburgers at McDonalds, be the best flipper in the world,” Putala said to a round of cheers from the seniors, who were garbed in the Turnpike Road high school’s classic white and blue colors.

New this year, graduating seniors were allowed to choose between the two colors for their gowns. Before, men wore blue and women dressed in white.

Valedictorian Anna Kochan recognized those students who bucked the trend. A few men could be seen in white; a number of women wore blue.

“Adapting to change is the only way to move forward and not get stuck in the past,” Kochan said. “I commend those students for their bravery. Change is inevitable. As I see it, how individuals adapt to change is what defines them.”