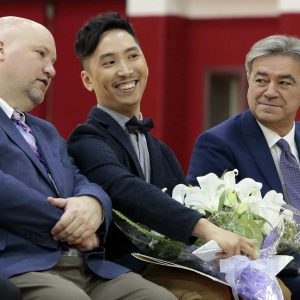 NEW BEDFORD — Senior TaShawn Arabian will be attending Brown University in the fall just like his English teacher Takeru Nagayoshi did.

Arabian said he’s looked up to Nagayoshi as a teacher and a role model, someone who’s pushed him to be the best he can be. Without him, Arabian said he doesn’t think he would have strived to go to Brown. Nagayoshi is the first person who took him to visit the school, he said, and has taken other students who enroll in his Advanced Placement seminar.

For Arabian, Nagayoshi is clearly someone special — and Massachusetts education officials clearly agree.

On Wednesday morning, Elementary and Secondary Education Commissioner Jeffrey Riley announced to students, school personnel and local and state officials that Nagayoshi has been named the 2020 Massachusetts Teacher of the Year — the state’s top award for educators.

“Mr. Nagayoshi cares about his students, his school, the New Bedford community, and our education system as a whole,” Riley said in a statement. “I am proud to know that teachers like him are working with our students, and it is a pleasure to recognize him today.”

Students say Nagayoshi has pushed them to their highest potential.

Senior Anna Lin who’s going to Boston University, where Nagayoshi earned his master’s degree, said the teacher has helped her become a great writer. She turned to him to edit her college essays and to ask for recommendations.

“Mr. Nagayoshi sees each and every one of us as a person with a story and treats us with compassion and prioritizes our education first,” said Joshua Correia, a senior who introduced his teacher on Wednesday.

Nagayoshi, 27, started with Teach for America out of college. Teaching wasn’t really something he imagined himself doing long term, but “I really fell in love with the craft of education,” he said.

He’s been an English teacher at New Bedford High School for five years.

He was born and raised in New Jersey, a son of immigrants from Tokyo. He and his family moved to Japan when he was age nine until 14 for his mom’s job at the United Nations. There he was a Japanese language learner and was met with a very different school experience.

When he returned to the United States, his English was really rusty and he didn’t have as much confidence.

“So honestly if it weren’t for the great teachers that I’ve had who believed in me and given me a platform and a voice, I don’t think I would be here today working with kids,” he said.