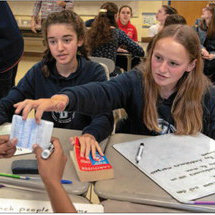 On a recent Monday morning at Hampshire Regional High School, Greg Reynolds asked his eighth grade students to come up with some stereotypes of French people. But this was no typical day in class.

In fact, several French students were actually in the room visiting, along with three of their teachers, and would be able to weigh in on the stereotypes. The French students, in turn, wrote their stereotypes about Americans.

The exercise was part of an exchange trip with 25 French students from Jeanne d’Arc Assomption, a school in Pessac, which is located in southwesternFrance near Bordeaux. The students visited Hampshire Regional last week and had spent several days in New York City before coming to western Massachusetts. They stayed with Hampshire Regional host families

and shadowed students in the school before going home on Sunday.

After the students spent some time writing their ideas on white boards, Reynolds gathered their responses.

“Most French people love soccer,” Reynolds said, reading what one student had written on their white board. One French student shook her head and another disagreed with her. Some French flew quickly across the room, and in the end, they agreed that the sport is widely practiced.

“As far as everyone loves it — that’s an assumption,” Reynolds said. “Oui,” the French students confirmed. They fact-checked some other stereotypes students held: all French people don’t wear berets, but they do eat a lot of bread, and all Americans don’t eat fast food often, but they do generally eat at frequent intervals.

Reynolds organized the exchange after connecting with a teacher at the French school through the American Association of Teachers of French.

Seventeen Pessac students made the trip last year, said Sébastien Bodin, a teacher at Jeanne d’Arc Assomption. This year, Bodin said there was increased interest in the trip. “All the class wanted to take part,” he said.

At Hampshire Regional having multiple fluent, native French speakers talk with each other in the classroom doesn’t typically happen.

“It really fills a void for me professionally and for the kids at an instructional level,” Reynolds said.

Bringing French culture to the school is also important to Reynolds. International travel can be expensive, and while there are some costs to hosting a student, Reynolds said, “It’s not anywhere near what it costs for a plane ticket.”

“It’s a nice way to bring that sense of adventure here,” he added.

In addition to the exchange program, Reynolds has introduced other outside influences to his class to connect with the French language and culture.

Thirty-one Hampshire Regional students recently traveled to Quebec City for four days, a trip that happens every other year for eighth and ninth graders, Reynolds said. For many students, he said, it was their first time traveling out of the country.

In addition, Mathieu Lippé, a poet from Montreal, recently led a slam poetry workshop at the school and students then participated in a competition.

Some of the major differences aren’t just language, but differences between the urban and rural areas the groups come from. “It’s more of a city mouse and country mouse type of thing,” Reynolds said.

Westhampton, where the school is located, had about 1,600 residents in the last census, while Pessac has well over 50,000.

Sometimes, Reynolds said, families can be nervous about having a foreign guest in their home, and students can naturally

self-divide into their two groups — American and French.

“Kind of like a middle school dance,” he said. In the end, however; the students connect.

Conri and Benard-Dende were staying with Phakos, while the other two girls were spending time at Phakos’ house while their host played in her softball game.

“We want to come,” said Baschy, “to discover the life of the American student,” finished Benard-Dende. Many of them started to learn English at a young age and are able to carry on conversations in the language, but sharpening their language skills was also a draw.

“I wanted to learn more French,” Phakos said, explaining her motivation to host. “It’s different experiencing it from a teacher than (from) kids my age.”

The students from Pessac taught her some colloquial phrases, like “zut te flûte,” which roughly translates to “darn,” the French girls said.

In many ways, Hampshire Regional is different from the school the French students attend in Pessac. For example, lunch is two hours long at Jeanne d’Arc Assomption, and Benard-Dende was surprised to learn that lunch in American schools is a fraction of the time. But in the eyes of Benard-Dende, school in the U.S. is more fun.

“We learn, but we have fun,” she said, which made Phakos laugh.

Like Reynolds’ exercise about stereotypes showed, both the American and French students had different ideas about each other and their countries.

“I had the stereotype that French people eat lots of bread and it’s true,” said Phakos. The girls confirm, telling her they usually buy fresh bread every day.

Although the exchange trip was educational at its core, there was plenty of fun to be had, too.

Aside from riding the school bus and shadowing Phakos at Hampshire Regional, some of the students went to the mall, played soccer, attended the Pride parade in Northampton and taught each other card games.

On Thursday, at around 7 p.m., the girls went downstairs for dinner in Phakos’ home. The four exchange students, Phakos, two of her brothers and her parents, Alex Phakos and Lisa Minter, sat around the kitchen table.

Over a dinner of chicken Alfredo, bread with butter, and apple pie, the students talked about the games and songs they exchanged and the possibility of roller skating at the Hampshire Mall in Hadley over the weekend.

Alex Phakos had a steady stream of questions for the students about their school and town and how they got to go on the trip.

He asked, who wants to come back to the United States? Quickly, four hands shot up.