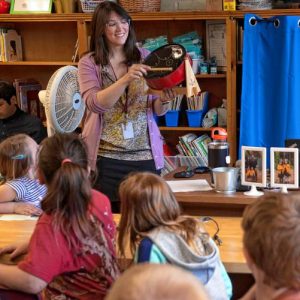 EASTHAMPTON – At the start of a lesson on African Caribbean history, Jodi Alatalo asked students, “How many of you have heard of the Caribbean?”

Hands belonging to fourth graders shot up in the air in the Maple School’s basement library. “How many know where the Caribbean is?” Alatalo asked, and most hands fell back down.

Alatalo, elementary literacy coordinator for the district, and librarian Jackie Janulewicz held five 15-minute lessons for students at Maple on Tuesday as part of “Día,” or “Diversity in Action,” a program geared toward linking literature with diverse cultures.

“We want to make sure we are giving kids background and not just surface-level cultural experience,” Alatalo said in between lessons.

For second-, third- and fourth-graders, a history lesson on the slave trade between West Africa and the Americas and the Caribbean provided the context to a poem by Faustin Charles of Trinidad.

Janulewicz told students how slave labor was used to grow sugar cane on plantations in the Caribbean and showed the rise in the average use of sugar in England over the course of 250 years in a chart. By 1850, the average person was consuming 40 pounds of sugar a year.

Explaining the slave trade in the Caribbean, Alatalo and Janulewicz told students how this created a fusion of cultures on the islands in the Caribbean. The French brought their tradition of carnivals and the Africans created instruments with oil drums.

“African slaves didn’t have musical instruments, they had to use what they could find,” Alatalo told to the class. “The steel drum is an important part of the Caribbean culture. It has become known around the world and it came from an island called Trinidad.”