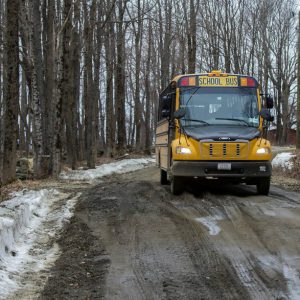 It’s hard for rural schools in Massachusetts to get kids to and from class every day — especially now, in muddy season, when the snow has melted and the rain begins.

“This is mud and ruts and a mess,” says bus driver Joanne Deady as she points to the narrow, unpaved road on her route from Colrain Central School in northwestern Massachusetts.

It’s just after the school day and she’s about halfway through her route. Standing between her and the next drop-off is a big patch of what she calls “greasy mud” — the kind her bus can easily get stuck in if it’s deep enough.

“We’ve got a steep drop-off with leaves, dirt and trees,” she says with a firm grip on the wheel.

Deady slowly makes her way through the mud, occasionally giving the roughly 20 elementary school kids on board some firm reminders to sit down and stay out of the aisles.

Muddy roads are one of many issues that school leaders face when trying to get their students to and from class in this district’s rugged terrain, which spans more than 250 square miles.

And it can get expensive.

For example, a bridge along one route is about to be shut down because it’s unsafe. School facilities director Robin Pease has to find a fast way around the bridge and soon.

“We’ve talked to parents,” Pease says. “We’re trying to give them alternative bus stops to go to so we don’t have to add another bus.”

The state and district officials don’t want kids sitting on buses for too long each day. So if Peas’ new route isn’t short enough, she’ll have to add an additional route. That would cost the district about $45,000 a year.

All of those extra costs add up to a hefty bill. For Buoniconti’s district it’s about $1,000 per student each year. That’s more than double the statewide average.

“It’s a major issue in our annual budgeting process,” he says.

Buoniconti adds that that budgetary pinch has gotten tighter over the last few years. This district, like many other rural school systems, have been declining in enrollment. Between 2008 and 2017, rural schools in the state lost 14 percent of their students. Fewer students translates to less funding overall from the state.