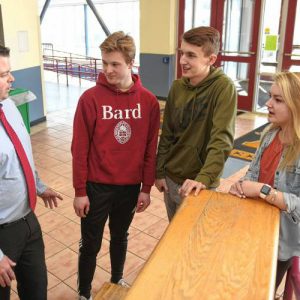 Students and educators from seven Pioneer Valley school districts are going to Boston on Feb. 28 to ask state lawmakers to increase funding for rural schools.

The students were supposed to go this week, but the trip was postponed due to inclement weather. The group has one main request: that legislators add a “rurality factor” to the state’s school funding formula, which hasn’t been revised in almost 25 years.

The current formula disadvantages rural schools, says the Hampshire and Franklin County Rural Schools Coalition, because it links funding to enrollment. In many of the school districts of the Pioneer Valley region, enrollment has declined in the last two decades, leading to less state aid. Yet fixed costs, like transportation, building maintenance and salaries, remain, resulting in a high “per-pupil cost” quotient.

“Our numbers, because we’re spread out, are declining,” said Pioneer Valley Regional School District Superintendent Jon Scagel. “We’re just bringing attention to this and saying, ‘As you move forward with new legislation, consider us out in Western Mass.’”