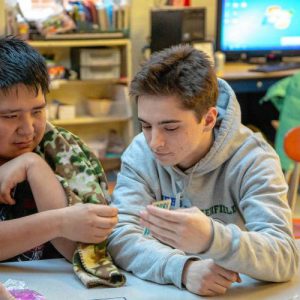 Assistant principals, of necessity, are often the high school disciplinarians, which doesn’t exactly endear them to their students. So the late Earl McGraw, the former Turners Falls High School assistant principal, must have been an exceptional person. After he died in the fall of 2016, students suggested the creation of an award that would honor his spirit and sustain his lasting influence on the school.

McGraw’s principles, as articulated by the admirers he left behind, included treating everyone with respect and without judgment, seeing someone who is down and lifting them up with love and laughter, going after goals with all your heart and helping others go after their goals.

The award, appropriately called the McGraw Uplift Award, is given to high schoolers who exemplify those principles and are nominated by students and staff.

This year the award went to a senior football player, Andy Craver, whose behavior and demeanor apparently demolishes the jock stereotype. Craver is also a peer mentor for the Transitions life skills special education class at the high school, and it’s in that capacity that he seems to most clearly channel Earl McGraw’s concern about lifting people up with love and laughter.

Principal Annie Leonard said one of the staff members who nominated Carver said, “He treats all students equally, whether they are the quarterback of the football team or a non-ambulatory, non-verbal student; they are all friends hanging out together.”

Leonard said when she read the nominations for the third annual Uplift award, Craver was described as “unfailingly positive, polite, empathetic, patient, accepting and kind – in other words, a mensch – a Yiddish word for ‘someone of noble character.’”