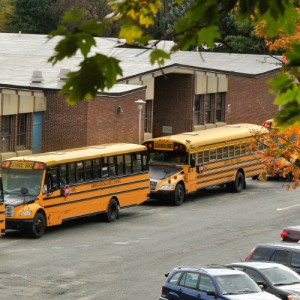 It’s shortly after dawn when Edward Lawson, one of America’s 3.2 million public school teachers, pulls his car into the parking lot of Julian Thomas Elementary in Racine, Wisconsin. He cuts the engine, pulls out his cellphone and calls his principal. They begin to pray.

Lawson is a full-time substitute based at a school with full-time problems: only one in 10 students are proficient in reading and math.

That may be explained by the fact that 87 percent of the students are poor and one in five have a diagnosed disability. Blame for test scores, however, often settles on the people who are any school’s single-most-important influence on academic achievement – teachers.

He says a prayer for all teachers – a fitting petition for a profession in crisis.

The crisis became manifest this spring when teachers in six states, sometimes even without the direction or encouragement of any union, walked off the job to protest their own compensation and school spending in general.

We think we know teachers; we’ve all had them. But the suddenness and vehemence of the Teacher Spring suggest we don’t understand their pressures and frustrations.

To try to understand, 15 teams of USA TODAY NETWORK journalists spent Monday, Sept. 17, with teachers around the nation.

We found that teachers are worried about more than money. They feel misunderstood, unheard and, above all, disrespected.

That disrespect comes from many sources: parents who are uninvolved or too involved; government mandates that dictate how, and to what measures, teachers must teach; state school budgets that have never recovered from Great Recession cuts, leading to inadequately prepared teachers and inadequately supplied classrooms.