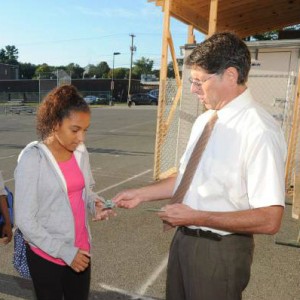 GREENFIELD — With a granddaughter now in the picture and a desire to pursue other passions, Gary Tashjian has decided to move on from Greenfield Middle School after 32 years.

Tashjian, who turns 58 this week, reflected on his tenure at the middle school, having spent the first 16 years as a science teacher before becoming an administrator for the past 16 years.

“Even though people say teachers have the summers off, it’s an incredibly demanding job,” Tashjian said, emphasizing he wants to spend more time with his nearly 2-year-old granddaughter. “I’ve just gotten to the point where I want to put energy in other places. In order to do a good job in education, you need to put most of your energies in it, and that’s just not what I want to do anymore.”

Tashjian expects to spend the next three to six months, in addition to helping out with the transition to a new principal, figuring out what it is that he wants to do next with his life. “I feel like I’m young enough and energetic enough to do something else,” he said, noting this is not a retirement altogether, just from education.

During his years at the school on Federal Street, Tahjian witnessed and was involved in the building’s reconstruction, demographic shifts, developments in technology, shifts in the education model and most recently, the merger of the Math and Science Academy.

He quickly thanked the teachers and staff who worked alongside him. “The staff at the middle school is exceptional. They work their tail off. That’s been a real positive thing for me to work with some real dedicated people.”