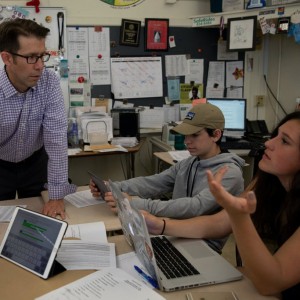 MAMARONECK, N.Y. — It’s just after 7 on a Thursday morning and Mamaroneck High School is empty — except for about 30 freshmen who are already seated in their classroom, laptops in front of them.

They are finishing the first year of a new initiative: a four-year program called Original Civic Research and Action, which requires them to immerse themselves in the workings of their town of Mamaroneck — just north of New York City — and find a useful solution to an ongoing problem.

The project — for which students get no school credit in the first year — is the brainchild of Joseph Liberti, a longtime government and history teacher at the high school.

And it is emblematic of a renewed nationwide effort to address, at both the high school and college level, issues that have been laid bare over the last few years — a lack of understanding of and trust in most civic institutions, a disconnection from government at all levels and intolerance for those who think and act differently.

Although he had been pondering such a program for years — modeled on similar ones the school has in drama and science — the election of President Trump gave it a new urgency and “launching it became much easier in 2016,” Mr. Liberti said. “The energy was there and I was able to ride that wave.”