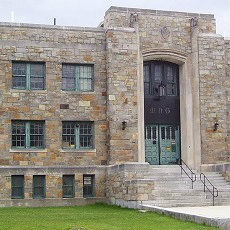 In response to increasing educational demands and budget pressures, public school districts have looked for ways to join forces to provide necessary resources and programs on a cost-effective basis.

One new example of that approach is North Berkshire Academy, the county’s first public therapeutic day school, which operates in the North Adams Armory building at 206 Ashland St. in that city.

This is offered within a structured, emotionally supportive community, according to Jodi Drury, the school’s director.

“We provide a combination of research based educational and therapeutic services and approaches with a focus on the needs of the individual students,” said Drury.

Three northern Berkshire school districts – North Adams, Adams-Cheshire, and North Berkshire School Union – have collaborated to launch the North Berkshire Academy, which is being operated for the districts by the Collaborative for Educational Services (CES).  A public, nonprofit educational service agency located in Northampton, CES (www. collaborative.org) is overseen by a board representing 36 member school districts in Hampshire and Franklin counties. It also provides services to other districts and education programs throughout Massachusetts and New England.

Among its other programs, CES operates HEC Academy, a school in Northampton that is similar to North Berkshire Academy. North Berkshire Academy opened in January.  On March 15, an official ribbon cutting event was held that was attended by Mayor Thomas Bernard, former Mayors Richard Alcombright and state Rep. John Barrett III, and other officials including Lt. Gov. Karyn Polito.

The academy grew out of conversations among the superintendents of the three school districts about the need for such a program in the northern Berkshires. They contacted CES, which agreed to help them establish and operate the school.

They also received a $148,000 grant through the administration of Gov. Charlie Baker in 2016.  The districts are jointly providing transportation and other resources to support the school. Drury noted that, while initially focused on the three member districts, the academy also accepts students from other schools throughout Berkshire County. Eventually, she said, the collaborative is expected to become a self-sustaining entity operated by the participating districts, which will require approval of the state. A related goal is to encourage other Berkshire school districts to join the collaborative. “We are working to invite other school districts to the table and become members,” she said.