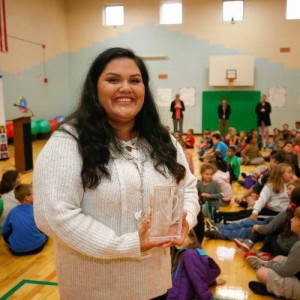 GREENFIELD — Her essay began with short, simple sentences about fifth grade, sentences like, “I was terrified. Absolutely and utterly terrified.”

It was a national award-winning essay that was read aloud in the Newton School gymnasium — written not by a current fifth grader but by a Newton School teacher about when she was in fifth grade.

“I was switching schools for the third time in five years. A new school, new teachers, no friends, and to top it all off, the children joining me in my new fifth-grade homeroom were all best friends from the other side of town,” wrote Jami Witherell.

Fresh off a plane from Chicago, the chief revenue officer of PeopleAdmin, a national education company, continued to read Witherell’s essay before a gym full of students Tuesday afternoon. The organization was announcing one of its four national winners this year in its “Inspire2Educate” contest, which asked teachers for the moments that made them want to become an educator. And one of those winners was Witherell, the third- and fourth-grade teacher from Newton School.

“Fifth grade was the year my parents divorced, my aunt had cancer, my mother moved away, and I (the Chilean adoptee) took on the belief that all of this, and more, must be my fault,” her award-winning submission read. “When I was most broken, felt most alone, Mrs. Willard took the time to love me, and often, I felt, pick up my broken pieces to show me that in fact, I was not too broken to be loved.”

As Matt Keenan, from PeopleAdmin, presented the award to Witherell, she started to hold back tears. Soon enough, so was Newton Principal Melodie Goodwin. The dozens of students looked on, keenly waiting to hear more about a clear fan-favorite teacher in the building.