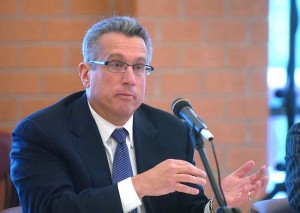 Longtime Elementary and Secondary Education Commissioner Mitchell Chester died Monday evening after a short illness, the state’s education board chairman announced at a Tuesday meeting. He was 65.

“We were obviously stunned by his death and deeply saddened,” Board of Elementary and Secondary Education Chair Paul Sagan said. Chester had been battling cancer.

The board observed a moment of silence in memory of Chester and planned to conduct an abbreviated meeting to hold necessary votes, while delaying matters that were not time-sensitive out of respect for him.

Earlier this month, a Department of Elementary and Secondary Education spokeswoman told the State House News Service that Chester had temporarily cut back on his schedule due to medical reasons, with Deputy Commissioner Jeff Wulfson fulfilling the commissioner’s duties with help from other senior staff.

Chester was selected by the Board of Elementary and Secondary Education to oversee the K-12 school system in 2008. He began his career as an elementary school teacher in Connecticut and then worked at the Connecticut State Education Department. He also worked for the School District of Philadelphia and immediately prior to joining DESE he was the Ohio Department of Education’s senior associate superintendent for policy and accountability.

Education Secretary Jim Peyser said Chester leaves a “legacy that will stand for many, many years and generations.”