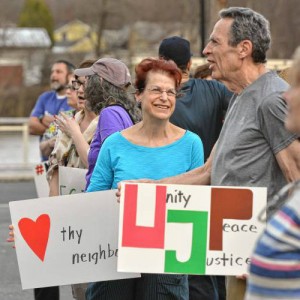 EASTHAMPTON, MA — In the face of another demonstration that drew about 200 people in advance of a School Committee meeting Tuesday night, school officials defended their actions in dealing with incidents of bullying and harassment at the school and vowed to keep working to improve the culture at Easthampton High School.

“We know it is hard work to confront the issues of systemic racism in any community, and we feel up to the task to meet the work with positivity and full engagement,” Kevin Burke, EHS’s principal, told the School Committee during Tuesday’s public comment session.

Over the course of 90 minutes, administrators, students, parents and others spoke about racial and harassment incidents at the school. Others spoke about moving forward, sticking together as a community and creating a positive environment for students.

The students were voicing concerns with the administration’s alleged indifference to hate.

A week later, at an April 5 School Committee meeting, a group of parents called for the removal of both Burke for failure to act on reports of bullying and harassment and School Resource Officer Alan Schadel for a conflict of interest.

At Tuesday’s meeting, Burke said the high school will create a three-year plan aimed to help the school become a more equitable and inclusive environment. The Collaborative for Educational Services in Northampton will develop facilitation questions, surveys and processes used to collect data to develop the plan of action. There will also be multiple forums where students, staff and parents can share their thoughts.