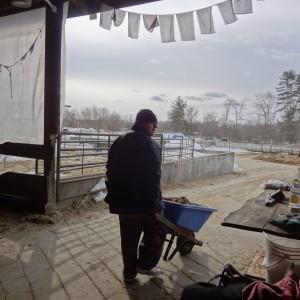 Doug stands at the large bin of red apples, pulling them out by handfuls to put in a large plastic bag. His work today is to fill bags of apples to a certain weight, so that they can be distributed by the Food Bank of Western MA. A tall young man with large hands, it doesn’t take long for Doug to fill, weigh, and close twelve bags, enough to fill a smaller box for transportation. This is one of two days each week that Doug spends at the Food Bank in Hatfield. Doug also works at Northampton High School and Full of Grace Farm, all part of his involvement with the Community Based Work Experience (CBWE) program; a supportive functional life skills program run by CES. The program helps students to live as independently as possible, and become productive participants in their communities when they transition into work-based and other adult services.

It’s an emotional time for Doug’s mother, Gina, and his teachers. Doug will soon age out of the CES programs that he has been involved with for many years. Doug is on the Autism spectrum, and began his relationship with CES when he was five. Doug is more ready for the major changes coming, because he “has grown considerably,” says Carole, Doug’s current teacher. “When he first came, he had a very difficult time accepting any noise, being corrected and following directions. He has learned now to be more accepting of situations, and learned how to self-calm.” Gina says that Doug knows “he is helping other people, and is really proud of himself.”

Through scripting, Doug has learned social skills that help him become more ready to be out in the world. He greets people when he arrives at work, and says good-bye when he leaves. He has been cleaning stalls at Full of Grace Farm on Tuesday mornings for at least three years. Originally, Doug got frustrated and had trouble with corrections or changes to his work or schedule. Now Doug is able to take suggestions, and waits patiently if work isn’t set up when he arrives. Keeping track of his own schedule, Doug now understands that things may be different every day.

Gina is also proud of the academic skills Doug has achieved. “He’s reading! I wanted him to be able to read and understand what he is reading!” His favorite books are the Magic Tree House series. Gina says “The CES program worked with me, made me part of the team. We brainstormed and worked together, and because of that, I think this is why Doug has done so well. CES has provided good support for Doug, they understand him. Every time he bumped up to the next level, I would get nervous, but by the third time, I realized it was going to be okay.”

Sherry Smith, CES Director of Special Education, says that Doug was one of her first students, in the then Specialized Primary Program. Says Sherry, “This is bittersweet for me, my career at CES has mirrored Doug’s progression, and I am so very proud of Doug and all that he has accomplished. I’ve learned a lot about people with Autism from Doug.”