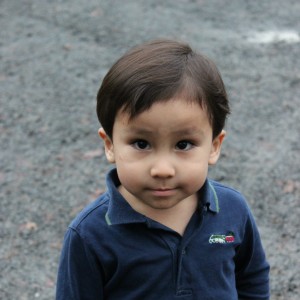 Three-year old Alan reviews the game options on the shelf behind the seat his mother occupies at a local coffee shop. He brings Connect 4 to the table, and with minimal help from his mother, sets it up. Familiar with the game, he loads the pieces into the slots and talks to his mother about his progress.

Alan’s mother Erika, a native of Ecuador, moved to the United States four years ago. She looks forward to continuing the studies in accounting that she began in Ecuador; but for now, her work and opportunities with Alan take up much of her time. She and Alan attend the new Spanish playgroups coordinated by CES as part of the Coordinated Family and Community Engagement (CFCE) funded work, and held at the North Village apartments in Amherst. At these gatherings, led by native Spanish speakers with extensive early education and parent engagement experience, Spanish-speaking families gather for community building, parental and family support, and early literacy, STEM, and early learning experiences.

Erika hopes that her son will grow to be happy and proud of his origins. She likes that the Spanish Program brings together families to support knowledge of Latino culture and that Alan likes attending these meetings. Alan frequently asks her, “Let’s go to Rosanna’s, when are we going to see my friends?” Erika also finds support and a welcoming community as a parent in these groups.

Alan is currently in daycare while Erika works. She wants him to be ready when he starts Kindergarten. When they arrive at the Spanish Program, Alan recognizes and greets his friends. He enjoys doing different activities with them each month. He especially likes those that involve colors and painting. “He also liked the slimy thing they did last month”, Erika remembers, grinning. She says that he has become very interested in books since attending the group. “He tries to read to me, telling me the “story” on each page. We also bought a plant because he learned to water them at as part of an activity and liked to do it so much!” The children play together well at these groups, with the older children acting as mentors to the younger.

Erika also appreciates that Alan is hearing more Spanish speakers. “I want him to speak Spanish,” she said. She wants him to remain bilingual as he begins school.

The CES CFCE work coordinates family centers, playgroups, parent workshops and special events for families in 17 communities in the region. The Spanish program, led by Rossana Salazar and Francia Wisnewski, has served 150 families since it began, and has since expanded with Hola Amigos y Amigas/ Hello friends, a cross-cultural program at all of our CES CFE programming sites. These engaging parent/child playgroup sessions introduce Latin American Culture and Spanish to kids from all cultures, through children’s stories, books, songs, games, art, toys and food.

Rosanna says that Erika and Alan have gained much during their time at the group. Erika practices her English language skills and has resources for questions, while Alan gains the social skills needed for an easier transition to a more formal school setting. They can interact with families who speak English and Spanish, and are from different parts of the world. “They are having fun together but also learning so much,” says Rosanna.