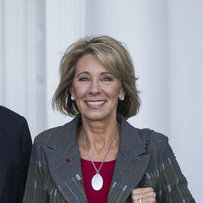 President-elect Donald Trump has picked billionaire Betsy DeVos, a Michigan Republican activist and philanthropist who is a strong supporter of school choice but has limited experience with public education, as his secretary of education.

DeVos, 58, is a former chairwoman of the Michigan Republican Party and helped push a failed 2000 ballot proposal to amend the Michigan state Constitution to create a voucher system for students to attend nonpublic schools.

DeVos is chairman of The Windquest Group, a Michigan-based investment management company. She is married to billionaire Richard DeVos Jr., the son of Richard DeVos, who co-founded the home care products company Amway.

Trump, in a statement, called DeVos “a brilliant and passionate education advocate.” He added that she would have the leadership ability to “break the bureaucracy that is holding our children back.”

Largely unknown outside of Michigan political and philanthropic circles, her appointment signals that Trump intends to make school choice and a voucher plan for low-income families a centerpiece of his education agenda.

School choice plans are controversial because in some cases they can allow families to use public funding for private schools. Critics say choice plans undermine public education, are often underregulated and can amount to profiteering.