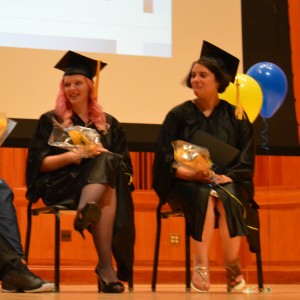 Northampton, MA — Five area students from HEC Academy in Northampton graduated from high school this morning, with ceremonies held at Smith College’s Sage Hall. Keynote speaker Anthony Clark, one of the country’s premier cyclocross racers, shared his insights about his troubled past, and the power that came from picking up a bicycle and building stability and eventual success with his commitment to the sport. Clark qualified to race in the 2016 World Cyclocross championships in Belgium The program also included remarks from a former student, Ross Montano, who graduated from HEC Academy in 2008. Montano talked about the challenges and struggles following graduation, and the importance of having something to be passionate about. Montano teaches Tae Kwon Do to children.

The students graduated from this year’s HEC Academy 2016 class officially graduated from their sending school districts. They are Shasta Aubuchon-Kenifick from Northampton, Deana Daniels from Springfield, Bethany Petrolati from Ludlow, Kevin “Spike” Ryder from Palmer, and Tessa Santor from Belchertown.

Three students received Ben DeMarino scholarships, named for the HEC Academy student who died in 2002, after graduating and moving to Memphis. The DeMarino fund assists HEC Academy students in manifesting their dreams. This year’s recipients are Shasta Aubuchon-Kenfick, Kevin Ringer and Kevin Ryder.