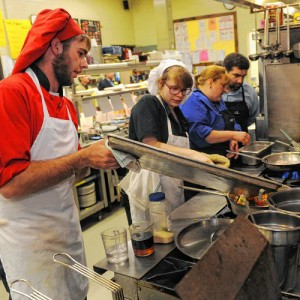 Student chefs and their elected competition - photo by Paul Franz

“If you can’t find lemons, look for some anise or anisette,” responded state Senate President Stanley Rosenberg, without looking up as he carefully slid a chef’s knife into the side of a large potato.

As Kulik made his way back toward his station, where he was mixing batter to make pizzelle — a type of Italian waffle cookie — state Rep. Susannah Whipps Lee palmed an apple corer into the bottom of her own potato, then worked a knife around its circumference. The result: a potato shaped like a mushroom; the perfect complement to her shiitake mushroom-topped sauteed chicken entree.

This particular legislative delegation had come to the school Friday afternoon to step off of Beacon Hill and into the kitchen for a few hours, where they faced off against two teams of Franklin Tech culinary arts students — seniors Joey Barcomb and Alix Burnette and juniors Kassidy Flores and Shayla Demers — in a cooking competition modeled after the popular Food Network show “Chopped.”

Before scrambling for piles of herbs, eggs, asparagus and other ingredients from the kitchen’s pantry — most locally sourced from Franklin County farms — Chef Ben Pike revealed the secret ingredients that had to be used in the entree and dessert dishes: a whole fresh chicken for the former, and local apples from Pine Hill Orchards for the latter.