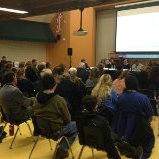 The Presenting panel was led by Bartlett and MASC Executive Director Glenn Koocher, and also included parents, teachers and school administrators. The forum would help clarify the differences between the MCAS and PARCC tests, according to Koocher. Students spoke on tape regarding their experiences with testing to begin the discussion, which moved afterwards to a question and answer period, and wrapped up with idea sharing and suggestions for moving forward.