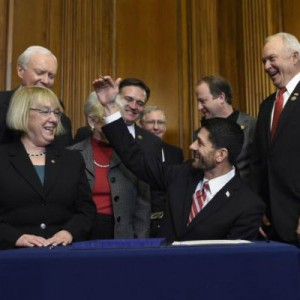 WASHINGTON — The way the nation’s public schools are evaluated — teachers, students and the schools themselves — is headed for a major makeover, with a sweeping shift from federal to state control over school accountability and student testing.

The Senate on Wednesday voted 85-12 to approve legislation rewriting the landmark No Child Left Behind education law of 2002, now widely unpopular and criticized as unworkable and unrealistic. The White House said President Barack Obama would sign it Thursday.

The bill would keep a key feature of No Child: the federally mandated statewide reading and math exams in grades three to eight and one such test in high school. But it would encourage states to limit the time students spend on testing, and it would diminish the high stakes associated with these exams for underperforming schools.

The measure would substantially limit the federal government’s role, barring the Education Department from telling states and local districts how to assess school and teacher performance.

There was strong bipartisan support for the measure, which had been endorsed by the nation’s governors, teachers’ unions, chief school officers and administrators.