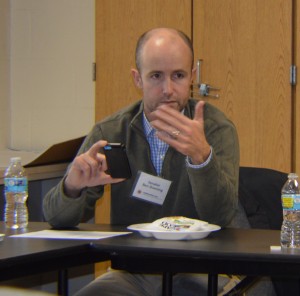 Shelburne Falls, MA — Superintendents representing most of the 36 Franklin and Hampshire County public school districts gathered today to share with legislators their concerns about the impact of charter expansion on small and rural districts. Representative Stephen Kulik, (First Franklin District); and Senator Benjamin Downing, (Berkshire, Hampshire, Franklin, Hampden Districts) were presented an analysis of data about the disproportionate impact of charter schools and school choice on smaller and rural districts, especially in Franklin, Hampshire, and Berkshire counties. These schools lead the state in the percentage of students enrolled under provisions of school choice. Public school districts in these counties also experience a financial drain as the number of charter school opportunities increase. Superintendents and school committees across the region are unified in advocating for a charter school policy for these districts that may involve a more equitable financial resolution.

Organized by the Collaborative for Educational Services (CES), the event was held on Monday November 23rd at the Mohawk Trail Regional School, hosted by Superintendent Michael Buoniconti, School Committee Chair Lark Thwing and Vice-Chair Martha Thurber. Among CES representatives was Education Data Engineer David Olsson, who developed a detailed analysis of data on charter and choice in Western Massachusetts at the request of the CES Board of Directors, which is made up of school committee representatives from its 36 Franklin and Hampshire County member districts.

Senate President Stanley Rosenberg and other legislators who represent member district towns have also been provided copies of the data analysis presented at the meeting, and the group will plan to present their findings on disproportionate impact at a State House visit after the new year.